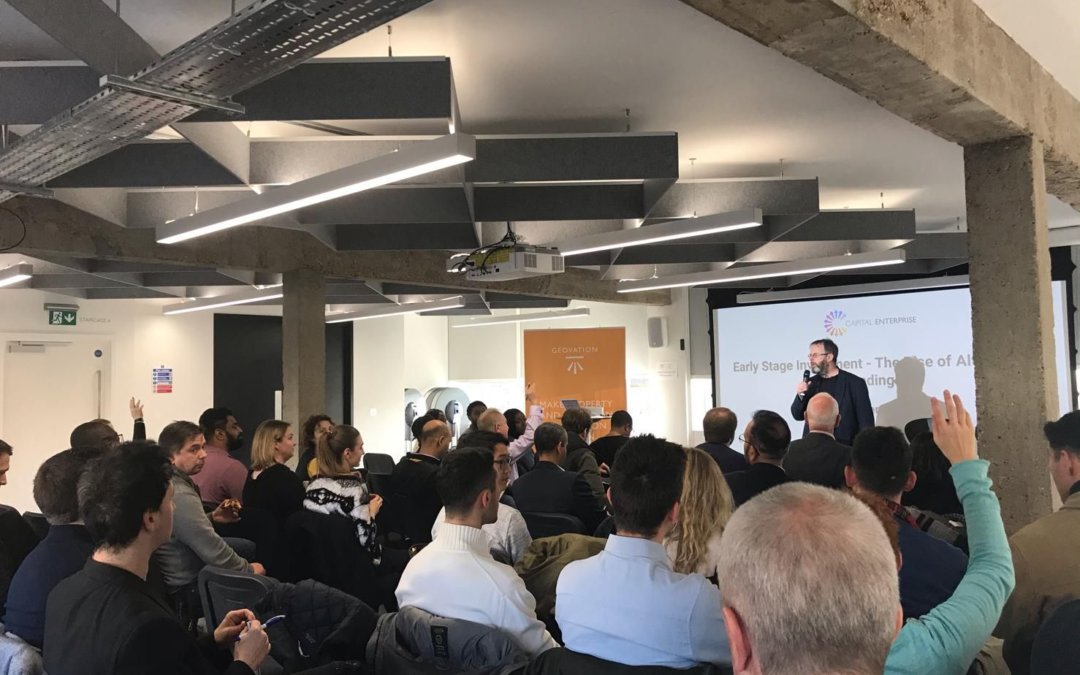 Last quarter, Capital Enterprise hosted an event to take an exploratory look at the future of early stage investment in London and to consider the emerging opportunities for funding the next generation of startups.

Access to finance is often cited as the number one issue for entrepreneurs looking to scale. The path of equity investment is a viable option for the few, but not for the many. For those struggling to access working capital, alternative finance has become an increasingly popular avenue of assistance. As the marketplace for alternative funding grows, this event explored the early stage funding landscape in London and asked how we can better meet the needs of early stage startups.

William, the founder of a watch brand named VT London

The importance of early-stage investment

An early-stage investment can be an imperative step for start-ups. Providing seed capital for new businesses allows them to carry out market research and prototypes, for example. From there the company can prove that the product or service will work as intended, and it will be a profitable venture. Unfortunately, many startups struggle to get initial funding. This event looked into alternative funding options and explored topics that many entrepreneurs don’t get the answers to. For instance, it asked if venture capital, as a service, has failed to find a market fit – and if there is a compromise when investing in profitable businesses with high growth potential.

Capital Enterprise’s programme OneTech supports those typically underrepresented in the startup world. Only 1p out of every £1 of invested money goes to all-female led teams, and only 15% of the digital tech workforce are from BAME backgrounds: These groups of people are typically underrepresented and unsupported, and OneTech wants to change that. It helps female-led companies and those from BAME backgrounds to connect to opportunities. After all, the tech industry creates products for everyone: we need a diverse team of creators for a society as diverse as ours. Andy Ayim, Entrepreneur in Residence at OneTech, revealed that OneTech in the last 12 months has helped startups and founders raise over £10 million, and created over 100 new jobs. In 2020, OneTech hopes to make it “more accessible to be an entrepreneur regardless of your background or where you come from.”

So, how does this relate to alternative funding? Andy started his talk by telling everyone about how he had always been intrigued by investing, as growing up he saw entrepreneurs becoming “rockstars”. But he also noticed that none of them looked like him, and soon realised that startup funding was risky. He noticed that many entrepreneurs felt like there was only one funding route available to them.

Did you know that less than 0.5% of new businesses use venture capital to fund their growth, whereas over 20% use debt and loans to fund their growth? As Andy says, “we need to do a better job as an ecosystem to educate kids, teenagers, and adults as to what this journey looks like.” The truth is, alternative funding success stories exist everywhere you turn, they just aren’t glamorised.

Andy gave the example of The Shavery. Four years ago, the founder of The Shavery was making a steady income through a blog about black entertainment. However, no VC was interested in her business model as they saw no money or profit in it. She eventually found an investor who was interested in the engagement that she received. He offered her $150,000 and the option to buy back 98% of her shares if she succeeded. Long story short, she began making 10 million MMR every year. That’s just one great example of alternative funding that works for everybody involved. Is there an appetite for alternative funding in the UK?

The majority of alternative funding success stories take place in the U.S. So, is there this same desire for alternative funding right here in Britain? Andy believes there is – especially for B2C startups. While there are government schemes available in the U.K, they’re outdated. “In order for us to innovate these schemes, we really need to consider these new ways of thinking.”

Of course, there are countless startups in the U.K, who are searching for alternative ways to fund their ideas.

The next speaker at the event was Maggie Rodriguez-Piza, the CEO at Funding London. Funding London bridges the funding gap for SMEs in London, offering sustainable growth and real opportunities. Through the provision of both equity funds and loans, they help grow the nation’s capital’s early-stage ecosystem. They were established around 50 years ago, with one specific mission; to support the economic development strategy for London. They have been doing just this, ever since. They have nearly invested around £70 million and leveraged that five times; their success stories include LaLiga, and Urban.

What is happening in London’s early-stage ecosystem?

Maggie pointed out there has been a shift since the start of 2018. What we’re now witnessing is the funding itself is growing, but the number receiving it is reducing. Which leads to the question, is funding getting more difficult? Maggie noted that, since 2012, there has been a huge amount of money invested by VCs. This is especially notable since VC funding was virtually non-existence back in 2010. However, since 2017 there has been a drastic drop, and the number of deals has been declining.  There must therefore be fewer deals being made, and only a select few startups are gaining larger amounts of funding. Why is this? Maggie observed that early-stage investment, especially pre-seed and seed funding, was hugely fuelled by angel investors. They have begun to slow down on this. Of course, the Brexit vote had happened by 2017, and the uncertainty has really changed how people invest in U.K companies.The evidence suggests that it is much more difficult to gain funding, hence why the appetite for alternative funding is so strong.

Below, we’ve compiled some panel highlights and key takeaway points.

Given our situation now, what can you recommend our next government to do?

Andy: We need to update EIS, and increase the threshold. It’s up to the treasury and the government to increase that threshold so that we can encourage another breed of angels to start investing. Because, at the moment, it just doesn’t fit the capital structure.

Yvonne: More should be done to enable more incoming models and new founders that are trying to break the mould. There are constraints put on first-time investment teams, and if the government were to support that, it would be really helpful.

Maggie: The government has this regional strategy, which is great for the regions, but I think it needs a lot of experience in London. London is not a region or a target region. It could be very useful to unlock the whole investment ecosystem around the U.K.

How hard is it to get through to funding companies?

William: There is an issue, and it’s obviously a hindrance for founders. I literally stalked the VC for funding. I stalked them on LinkedIn, Twitter, listening to podcasts. I made warm introductions to them so that by the time that I wanted to get investment for a backstage, I’d already had those middle-man friends. We can complain that we don’t have those links, but we can create them.

Andy: It’s not about quantity, it’s about quality. It’s about buying into the thesis of a VC. With a lot of founders, there’s not a lot of investor empathy, around understanding the investor process. Is there a right time to approach a VC?

Yvonne: I don’t think there’s a right time. There’s no time of year where we think “okay we want to get X amount of deals done.”

Maggie: From an entrepreneurs point of view, you should never think “okay I need to approach a VC by the end of this month.” But to elaborate on this, Christmas does get in the way, and I think suddenly in the U.K, is that the tax year ends at the end of March. So, there’s a lot of VIS investment and a lot of VIS funds that need to be used up.

How do you make yourself compatible with different funding streams?

Andy: It’s partly about storytelling. A lot of VCs talk about “your market’s not big enough”. But the truth is; all of the biggest consumer companies I know today had no idea about their market. Look at Amazon. All of the most ambitious founders grow into new markets.  An investor is looking for you to fit into this category.

Yvonne: The market has to be there, but you may outgrow these markets. You just need to sell your story and find a VC that will back it.

Maggie: A VC is only human and there’s only so much that their human brain can process. I think a lot of what you’re seeing is yet to be proven or “yeah there’s a huge market but are you going to capture it.” Tell a story that is very concise and doesn’t cover the next ten years, but maybe the next two or three.

The importance of networking

When it comes to startup funding, networking is crucial. Networking, in itself, is a long-term investment. It enables you to meet like-minded people, that will help you in your future goals, and other plans. Being part of a network today could mean that you find your next investor tomorrow. As William mentioned in the panel, in order to secure funding, it takes time. He started with social media and made his way to the “middlemen”. It’s a process which can ultimately ensure that you get the funding you deserve. These events, created by Capital Enterprise, focus on networking. Part of the event was dedicated to talking to others in the industry and finding out more about VCs and startup companies. Having this mindset will help London’s early-stage ecosystem give way to a range of new alternative funding ideas.

The market for alternative, early-stage funding is there. It has been proven to be able to change the early-stage ecosystem, and give amazing startups the chance to prosper and blossom.

With help from companies like Capital Enterprise and Funding London, entrepreneurs in the U.K could prosper – it’s time for the wider scene to catch up! 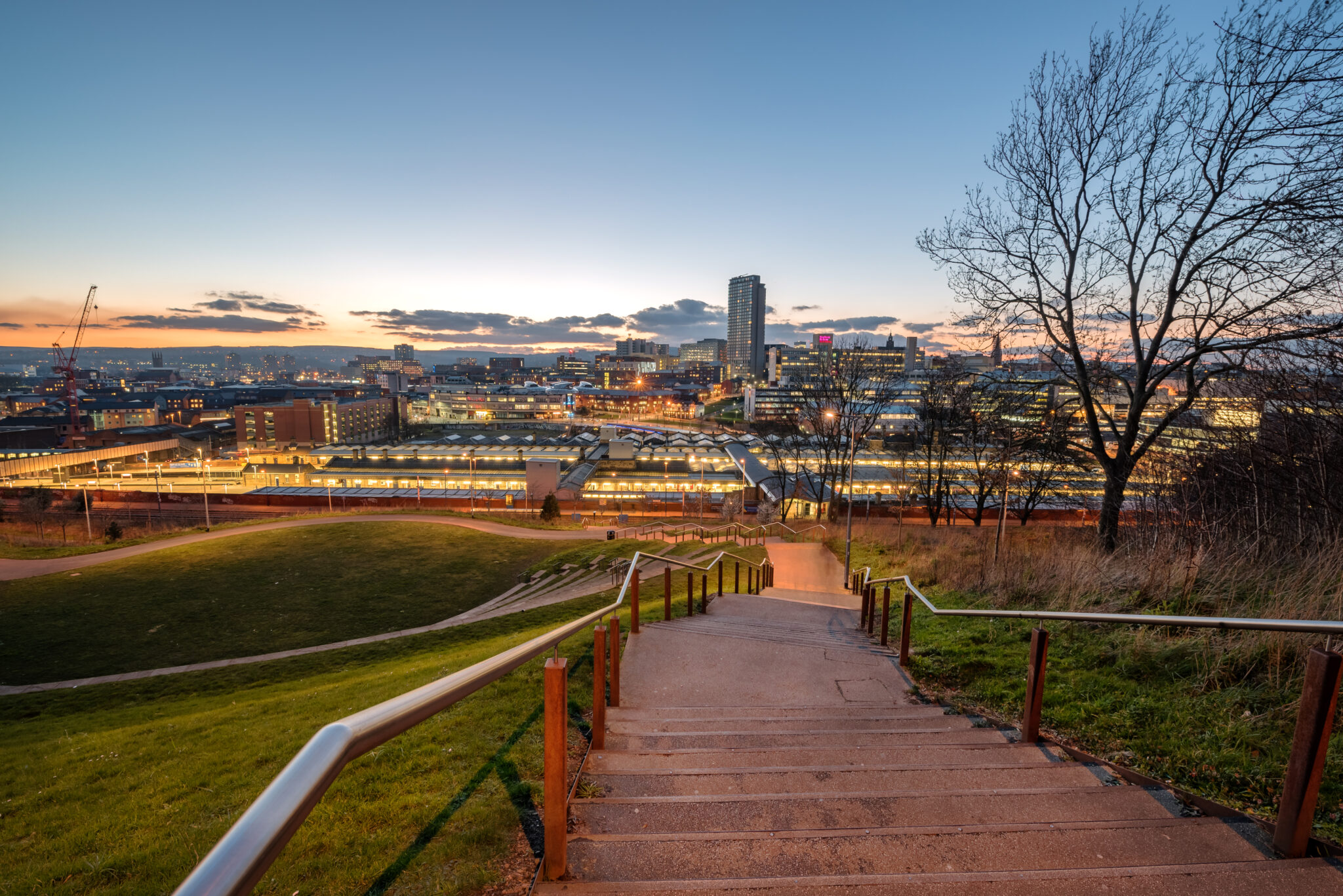 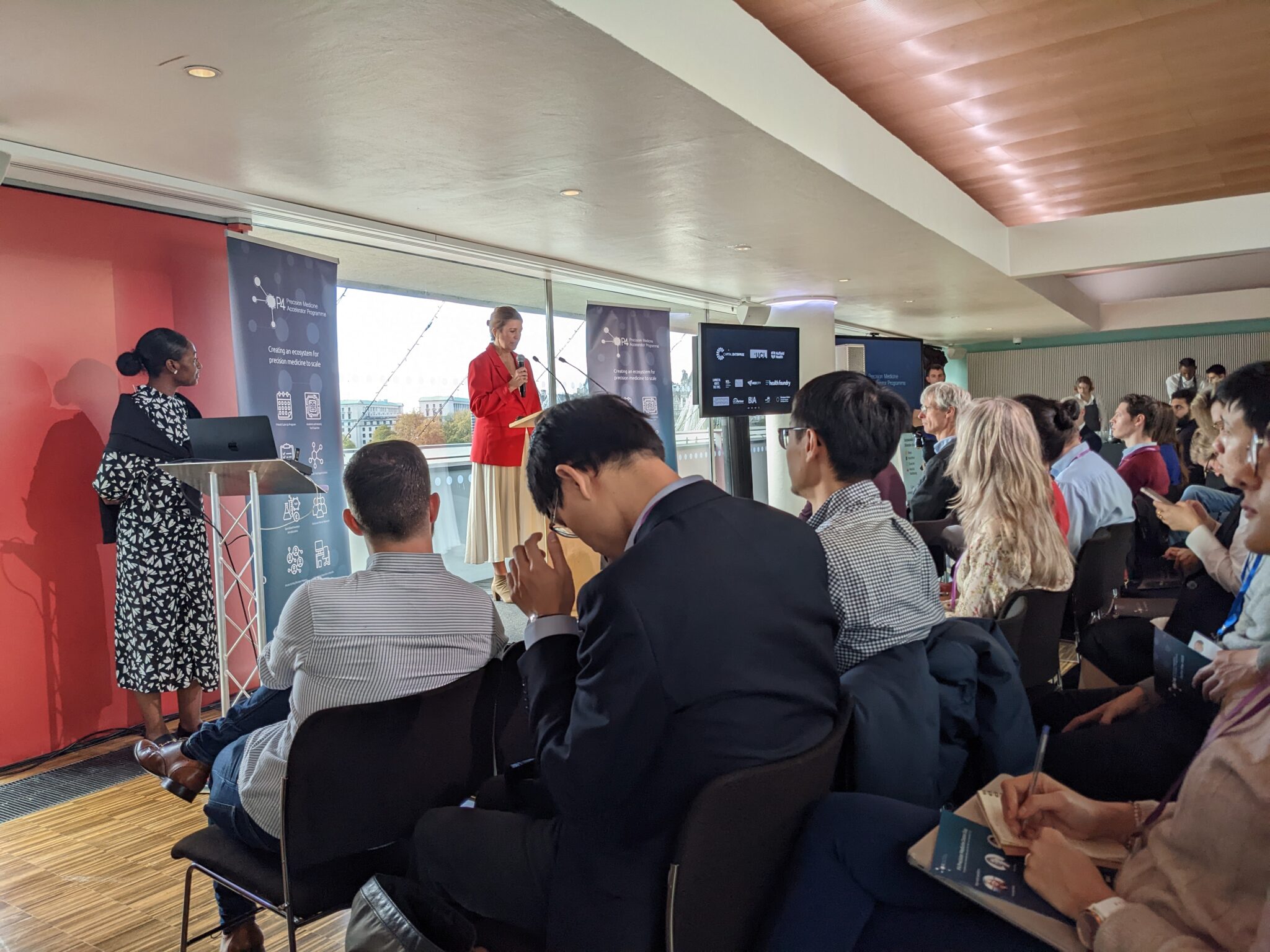 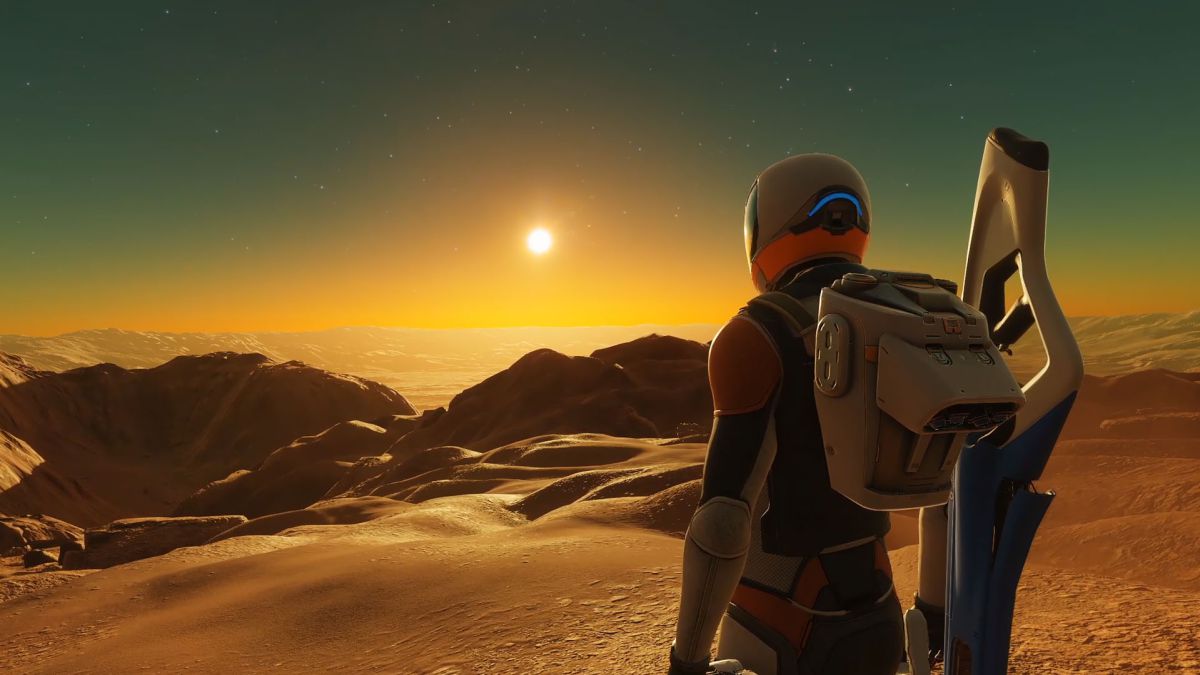